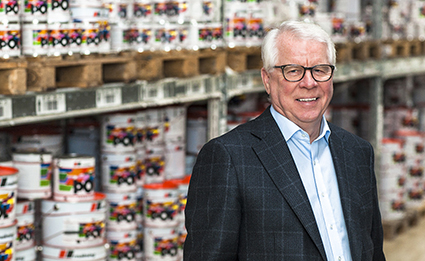 The headquarters of Málning hf, in Kópavogur. Málning hf was founded on January 16th, 1953. A great many of the founding members were descendants of Pétur Guðmundsson in Málarinn.

At first, the business was run in an old school building, on Kárnesbraut 32 in Kópavogur. As the years went by, the school building was adapted to its new function and extended. In 1981, the sales department and the warehouse were moved to Lyngháls 2. The production and other daily activities remained in the old building.

On July 13th, 1987, the company suffered a hard blow, when the building on Kársnesbraut was completely destroyed by fire. The damage was very upsetting and the financial loss was considerable. Raw material and other goods worth tens of millions of Krónur were destroyed, and the building, 2,000 square meters in size, was in ruins. Through a quick rescue effort, the main production machines were saved and kept fully operational. With a combined effort from the staff and the owner, production was resumed only a few days after the fire, first in Lyngháls 2, and then, from October 1987, in Funhöfði 9.

On October 19th, 1998, the warehouse and the sales department were moved to an elegant three story building on Dalvegur 18 in Kópavogur. A little later, on January 1st, 1999, the remaining departments were moved into the same building.

Finally, all divisions of the company were then operating under the same roof. The new building was designed by the architect Ingimundur Sveinsson. Production and marketing of Spred Satin, the first water-based paint commercially sold in Iceland, was started during the early years of the company. This was an improvement for Icelandic consumers, who at the time had nothing other than polluting oil-based paint. 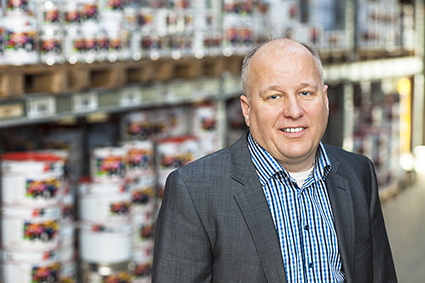 The production of Spred Satin was ended in 1973. It was substituted with the diverse range Kópalvörur, still today comprising a large part of the product selection. Málning hf has always focused on product development and research. The company has collaborated with many foreign manufacturers, such as Jotun in Norway, Loba in Germany, Becker Acroma in Norway, among others. Málning hf plays an active role in various collective research projects, both at home and abroad. Domestic product development, customized for Icelandic conditions, is still the heart of the business. A few product examples are the exterior paint Steinvara 2000, the wood protection series Kjörvara, the roof coating Þol and Akrýl Þol, which can be diluted with water, and the variation Epox1, a water-based epoxy paint. Further information on these and other products can be obtained elsewhere on the webpage.

Throughout the years, Málning hf has sold paint to other countries, such as England, The Faroe Islands, and Latvia. Málning hf works in collaboration with Kveik, a Faroese company with a production license from Málning hf.

At the start of 2010, Málning hf made a big investment in Slippfélagið in Reykjavík. Consequently, Málning hf is now by far the biggest company in the Icelandic paint industry. Málning hf has always made an effort to hire skilled and well-educated professionals. The staff now comprises forty people.

Málning hf develops its products in its own research lab. The products are tested for Icelandic conditions. Málning hf offers all the colors our customers could wish for.

Málning hf is the single paint production company in Iceland, and uses only its own recipes.